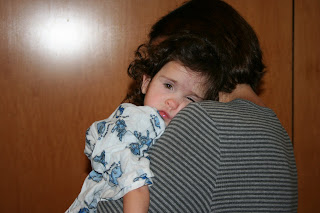 ABBIE WAITED PATIENTLY FOR THE NURSE TO TAKE US BACK TO START THE MRI.

Abbie has 2 small canals in her spine that we recheck every year for any changes. These have been there since birth. They are explained as little open areas next to the spinal cord with spinal fluid in them. If they grow and continue to fill with fluid they would begin to compress on her spine and nerves and cause lower extemity paralysis. Last year there was no change. This year we did the MRI on Jan. 2. Abbie did very well without being able to eat. It took about 1 1/2 hrs once they began. They took me back with her to get her to sleep before they started the IV. She went to sleep with a fight to the very end. Then I had to leave for the MRI itself. They told me it would be about 45 min. I started to get a little nervous when it took so much longer. Finaly, they came to get us to see her in recovery. She did great under the anesthesia. The reason it took so long was Abbie is a very hard stick. It took 7 times of not getting a vein before they called in a 2nd Anesthsiologist in to help with a jugular vein IV. This was kind scarry to me but they said the bleeding stopped fairly quick. Yuck!!! Any way, the Dr. called me with the results saying one of the canals looks to be getting smaller and the other is still the same. Good news! It looks as if this is going to resolve itself with no surgery! We will check again next year.

Posted by Kimberly Whitaker at 11:05 AM

Kim, that's great news! Abbie is doing so well. That paves the way for her to become mobile someday. See you this summer!

FOUND IT!! This page is beatiful.Very well written, You are good.What good gifts God gives.KISS ALL THE BABIES for me.
love you, Paula

My name is Jessica and I have a 2 year old little girl with 1p36 deletion. I am trying to find out from other mothers if sleeping problems have been an issue. My daughter will go to sleep great but wake up in the middle of the night and cannot self sooth. Have you had any experience with this? 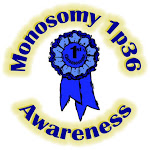